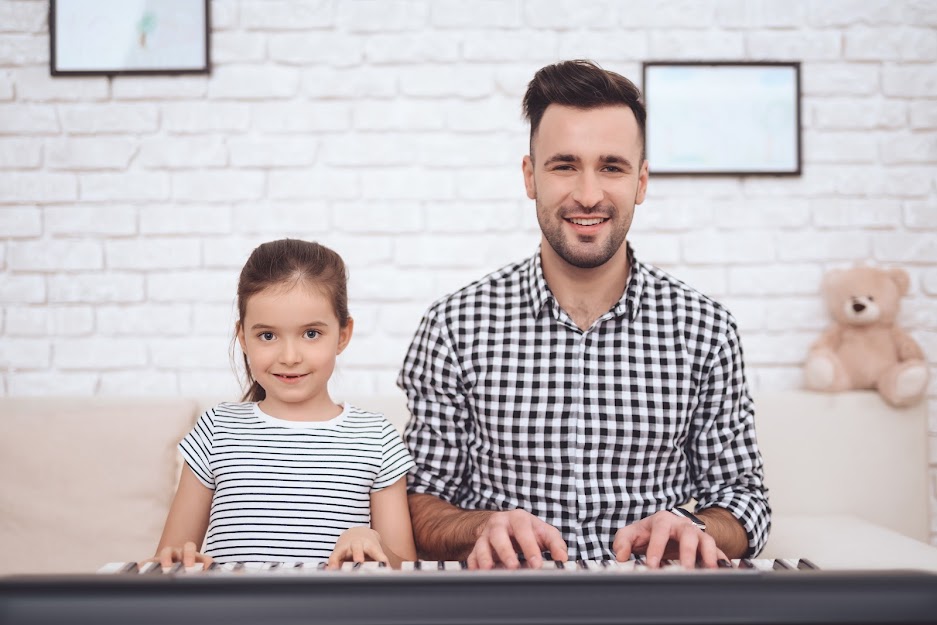 The Chordomatic piano game has the power to universally delight kids. At the same time it solidifies their knowledge of the six basic piano chords. It presumes that your child knows how to play the C, F, G  D, E and A chords.

Allow the child to play a two-note chord, which is really just the bottom two notes of a chord in root position. So for a C chord, they may play just the notes C and E, rather than all three, C, E, G. The apparent object of the game is for the child to beat you to the keys. They have to play a chord before you do.

All kids love a race. I pretend that I am Chordomatic, a boasting, infallible chord robot who is so fast that he can never be beaten. I build up the conceit that Chordomatic has condescended to compete with them. Victory is assured for Chordomatic. He is a grand, imposing figure.

Of course, after the first time, Chordomatic always loses, and the child wins. The real object of the Chordomatic piano game is to solidify the child’s knowledge of the six basic chords to the point where producing them is almost automatic. In general, I allow the child to imitate me and play the chords with the second and third fingers of the right hand.

You’ll find that is the best choice of fingers for “dive-bombing.” I don’t insist that they play left hand chords with the fingers numbered 1, 3 and 5, as most standard texts demand.

There are several two note chords you can try using our online piano. Try them on a real piano, playing the two keys at the same time.

But the object of this game is speed, so we use two fingers and two note chords, especially if they are very young or unsure.

First I raise my fingers (the first two) high above the piano and announce that “Chordomatic” has been sighted in the area.

In an ostentatious, robotic voice, I demand, “Chordomatic commands you to play a C chord!” and then I dive for a C chord as fast as I can, inevitably beating the child to the keys. I make a noise like an airplane buzz diving towards the ground for extra theatrical impact.

The child senses that fun is happening, and they will immediately try to beat you. The next chord, say F, I get to a little more slowly so that we have a tie. By the third chord, I let them beat me.

Get Them To Think About Chords

We then embark on two or three minutes of chord study using this silly game. Chordomatic (me) sometimes gives more information if they forget that D, E and A chords have a black key. I will say, “Chordomatic commands you to play a D chord with a black in the middle!” After a while all I have to say is the word “Chordomatic!” and the child leaps to the keys to beat me, wildly playing every chord they can get their hands on.

The next extension of this game is to select a chord, say C, and have the child play every C chord on the piano. You will have to show them that C chords are right next to the group of two black keys, but this variation teaches the child the larger pattern of the piano.

Chords are the DNA of music and every child benefits from having the six basic chords at their fingertips. This game always succeeds in fascinating kids with chords and increases their ability to produce them quickly and happily.